The new standard in equine bedding

Chip off the old block to power the future

November 4, 2014 in Latest News and Information 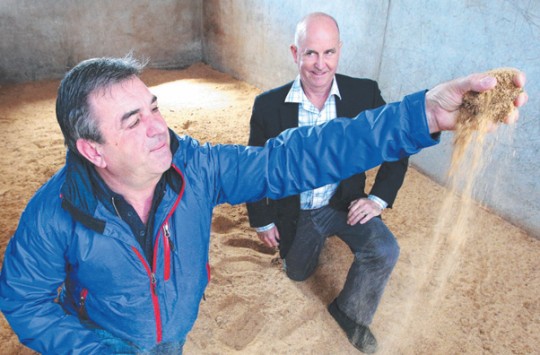 MARK Kavanagh makes a good point. Looking out across his expansive training complex at Flemington, he says the last thing anyone wants over the four-day Melbourne Cup carnival is for the 330,000 racegoers in all their finery to catch an unpleasant whiff from the stables. “We can’t have flies and smells here. This place has to be absolutely pristine as we are only 200m from one of the greatest sporting events in the world.’’

It makes the trainer of 2009 Melbourne Cup winner Shocking and 2008 Cox Plate winner Maldivian particular about the bedding used in the stables, home to more than 50 horses during the carnival. Earlier this year he trialled a new dried wood pellet animal bedding product with super absorbent properties from Queensland called Proteq. He liked it so much he has become part of the business, itself part of the privately held Altus Renewables.

“We are always looking for something that will give us an edge. But like anything, it is a massive commitment to change. We get products introduced to us every day,’’ Kavanagh told The Weekend Australian. “So we decided to trial it over three months and I immediately thought it had potential.’’ Normal equine bedding is (wet) sawdust and wood shavings. Dollar-wise, the compressed and dried wood pellets (which retain absorbency after being wet down into sawdust for use in the stable) are a little more expensive. “But it is a better product,’’ Kavanagh said.

“Where we get the savings is when the stable is cleaned, as more of the bedding stays behind. So we end up paying lower disposal fees.’’ There are also health benefits — for horse and stable hand — because there is less dust. The elite horses housed at the Kavanagh stables like it too. “The ones I have spoken to say they like it a lot more,’’ he jokes. “But we can tell they like their bedding because a happy horse always pisses in the same spot, and that is what they are doing.

’’ Kavanagh has Chivalry going around today in Race 7 at Moonee Valley’s Cox Plate race day. Early markets had Chivalry 5-1 equal favourite for the set weights race for three year-olds. Kavanagh’s ambassador role for Proteq plugs him into the much bigger plans that Altus has for its “densified’’ wood pellet. The product is plugged into the world’s growing hunger for biomass- based fuels for the generation of renewable energy: as the wood pellets get burned, they are replaced by the next plantation pine that reaches maturity.

The wood pellets used in equine bedding are one and the same as those Altus recently shipped off to Korea to be used as a renewable addition to the fuel loaded into coal-fired power stations, and domestic heating. The maiden shipment of 26,000 tonnes of wood pellets marked the start of a new export industry for Australia, with founding chairman of Altus Denis Waddell planning to replicate the successful start in Queensland with projects in South Australia, Victoria and NSW. Funding the growth could involve an ASX float of the company in two to four years. The initial project is located in the Tuan Forest near Maryborough, and it has production capacity of up to 125,000 tonnes of wood pellets annually. Export prices are about $140 a tonne. Prices for other products — equine bedding, kitty litter and spill absorbents — command much higher prices.

The facility sits across the fence line from the privately owned Hyne Tuan sawmill — the biggest in Australia — and utilises sawmill residue to manufacture the wood pellets, essentially a kiln drying and compression process in which water content is dramatically reduced. The key competitive advantage is the direct sourcing — by conveyor belt across the fence line — of the sawdust. Waddell said the Brisbane based Altus was involved in talks with several European brokers and Japanese and Korean trading houses that are seeking to market the wood pellets to targeted end users. He said that the pellets were a “sophisticated form of packaged energy’’. “As a result of the unique properties, wood pellets are becoming the product of choice for a range of small and large-scale biomass renewable energy applications,’’ Waddell said. “Firing wood pellets with coal allows power generators to produce electricity with minimal loss of efficiency while meeting their renewable generation offset requirements.’’ Continued strong growth in demand is forecast, with some estimating global demand could reach 140 million tonnes by 2020. The market in 2007 was eight million tonnes. Waddell said the European Union’s 20 per cent renewable energy target by 2020 provided the initial stimulus. Europe is estimated to account for more than 60 per cent of current demand. Kavanagh says he likes the “green’’ element, ‘‘but it has got to be price effective as well’’.

Want to become a stockist? Get in touch today!